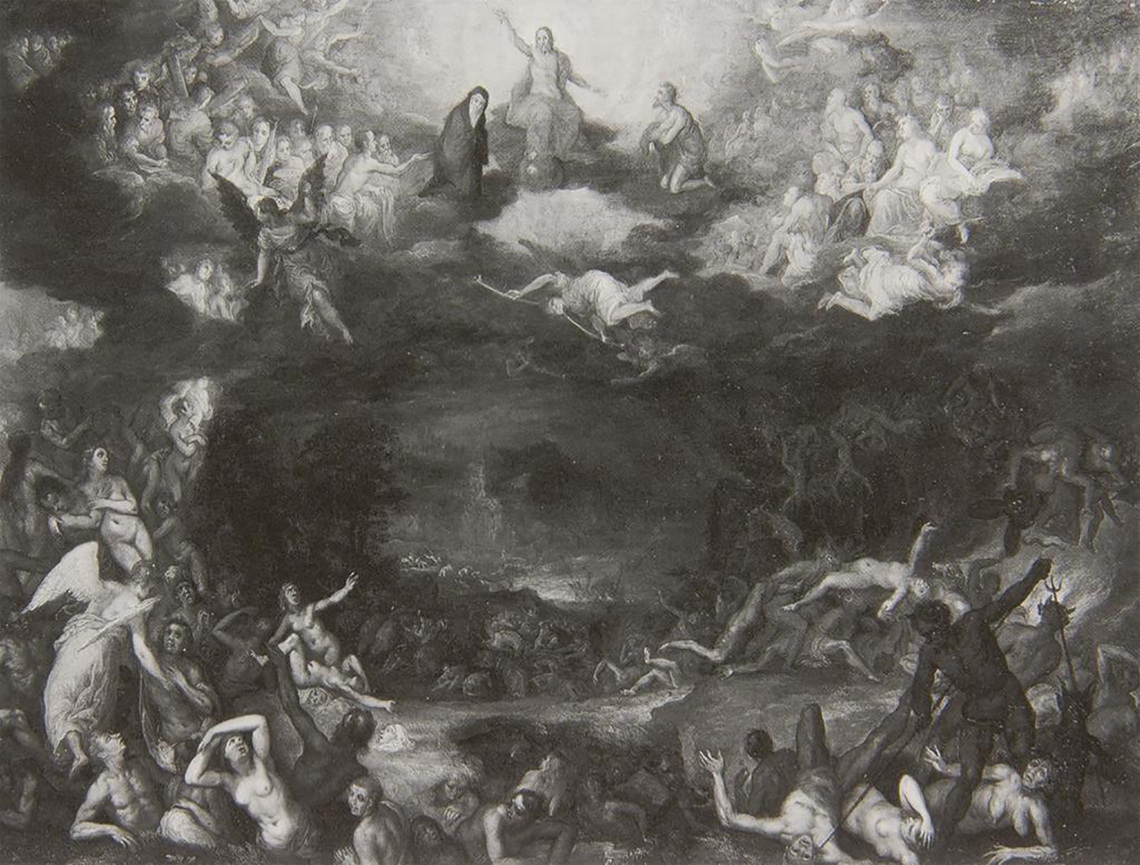 Possibly, like the Zurich Flood with Noah's Ark, a picture originally executed for Benedetto Guistiniani: this is the only surviving autograph work by Brueghel that matches a subject listed in his inventory at this date, of this size ("uno del Giuditio"). See Discussion page for the Zurich painting for more details.

A version of this is in Copenhagen, Statens Museum, # KMSsp180. It was in their Kunstkammer by 1690; is in that inventory. It's also on copper, 27.5 x 36, and is dated 1602 (too late for the Giustiniani inventory). Their catalog calls it a studio replica of this picture. Both, they say, are based on a Rottenhammer painting in Munich, dated Venice 1598, which however is an upright format. Ertz does not mention the Copenhagen work in his new catalogue but he does illustrate a version sold Sotheby's London December 6 2007 #151 (copper, 27.8 x 36.7, signed & dated 1607), which has a Peter Stas mark on the plate. He says it might be original but it was correctly (to my mind) sold as a copy; it looks like a rather weak studio version from Ertz's illustration.

When this was sold in 1953 it had with it a Hell scene (Ertz mistakenly says that it was sold with the Zurich Noah's Ark). the Hell scene was of the same dimensions and also dated 1601.

If the 1601 version was indeed sent to Giustiniani immediately upon its completion, then either the other two were based on a full pattern drawing or, more likely, they were all begun at the same time in Jan's studio and finished off when buyers wanted them.

The Rottenhammer picture on which all three of Jan's paintings are closely based is dated 1598 and is documented in Antwerp ca. 1626 by its appearance in the Gallery of COrnelis van der Gheest; but clearly it had come to Antwerp almost immediately upon its completion because Jan knew either it or a drawing of it by 1601. Since Jan and Rottenhammer were friends, I suspect that the former served as an agent/mediator in getting this work into the hands of an Antwerp patron.