Peter Paul Rubens was born in Siegen, Germany in 1577 to Jan Rubens, a Protestant lawyer and alderman, and Maria Pijpelinckx. In 1568 while serving as her secretary, Jan had an adulterous affair with Anna of Saxony, Princess of Orange. The family was exiled from Antwerp to Westphalia where Peter Paul was born roughly a decade later. At the age of twelve, after the death of his father, Rubens and his family moved the family back to Antwerp, the city that would foster his enormous individual fame and his success as a collaborator of Jan Brueghel.

Once in Antwerp, Rubens was enrolled in the prestigious Latin school of Rombout Verdonck and by age thirteen became the court page in the household of Countess Marguerite de Lalaing d’Arenburg. Both Classics and court society would become recurring motifs throughout his life; in his adulthood Rubens was fluent in six languages, collected ancient gems and other objects, and had Classical texts read aloud to him as he worked. His early introduction to Classical education and the social nuances of the elite class afforded him flexibility and freedom in his relationships with patrons who entrusted him with artistic and diplomatic commissions alike.

Young Rubens quickly grew bored with the court routine and began an apprenticeship with the landscape painter Tobias Verhaecht. In 1594, after a further apprenticeship with history painter Adam van Noort, he went to work under Otto van Veen, a distinguished artist and intellectual who directed a large studio in Antwerp. Rubens may have worked with Van Veen until his departure for Italy. All the while, the voracious young Rubens pursued his own artistic self- training; he copied the early prints of German masters, attempting to broaden his visual lexicon. He became a master in the Guild of Saint Luke in 1598 just one year after Jan Brueghel was admitted into the Guild as a “master’s son.” This artists’ society was likely the initial point of contact for Rubens and Brueghel who completed their first collaboration, The Battle of the Amazons, in 1599 (Potsdam).

Shortly after the completion of this inaugural collaboration, in 1600, Rubens left for Italy. His first stop was Venice, where he studied the works of Titian, Veronese and Tintoretto; then he came to Mantua, his most settled home during his eight year Italian sojourn. In Mantua he worked at both painting and duplicating portraits for Duke Vincenzo I Gonzaga. During this time Rubens was given access to the duke’s private collection—an assemblage of fine art from both the Classical and Renaissance periods which he studied assiduously. From Brussels, Archduke Albert, the regent of the Spanish Netherlands, had kept himself aware of Rubens’ progress abroad, and in 1602 he commissioned the artist to paint an altarpiece for Santa Croce in Gerusalemme, Albert’s former titular church in Rome. While in Rome Rubens absorbed the lessons of both the High Renaissance (especially Michelangelo) and antiquity, including the Belvedere Torso and the Lacoön among other great works. He became enamored of the sculptural quality of human anatomy, an interest that would later become his speciality in collaborations with Jan Brueghel.

In 1603 Rubens was sent as an emissary from the Gonzaga court to that of Philip III in Madrid. He remained there for a period of eight months from which time there is only one documented commission: the equestrian portrait of the Duke of Lerma (Madrid, Prado). Six years into his Italian sojourn, Rubens had already accomplished his first diplomatic mission and began to feel stifled by the Gonzaga court. He requested permission to remain in Rome, and with it granted he moved in with his brother on the Via de la Croce. While in Rome he received the commission to paint the altarpiece for the Oratorian Church of Santa Maria in Vallicella which was one of the most prestigious commissions available within the city at that time. The altarpiece came to completion in the same year as his Italian excursion.

In 1608 Rubens left Italy for Antwerp to see his mother who had grown ill, but did not arrive until a few days after her death. Rubens vacillated; he was unsure whether he should return to the security of his fame in Italy or attempt to make a career for himself in Antwerp. He chose the latter option and within a few short years, his resolution to achieve renown in Antwerp proved successful. By the time Rubens returned to Antwerp, Jan Brueghel had become very well established as an artist and member of the elite community. He had served as both co-dean and dean of the Guild of Saint Luke, served as a painter to the court of Archduke Albert and Archduchess Isabella, and had enjoyed for roughly a decade membership in Confratum Collegij Romanorum apud Antuerpienses, a prestigious group of Antwerp citizens who had spent time in Rome. Through his close friendship with Brueghel, who introduced him to this community of Antwerp Romanists among other prominent social relations,and the swift growth of his own artistic reputation, Rubens quickly achieved eminent status within Antwerp society. Within the first year of his return he was commissioned to paint The Adoration of the Magi (Madrid, Prado) for the Antwerp town hall. In 1609 he was appointed the court painter to Archduke Albert and the Infanta Isabella and enjoyed privileges similar to if not more extravagant than those allowed to Brueghel. With his standing in Antwerp established, he married. He bought for his new bride, Isabella Brant, and himself a home in the most posh area of Antwerp, while for his pupils and assistants he designed an adjacent studio in the Italian style.

Though features of his style —his distinct interest in in Classical subject matter, his mastery over the human form, and his preference for working on a large scale-- betray Italian influences, in Antwerp, Rubens modified elements of his artistic process to suit the aesthetic of the North in which he had been trained. One such alteration was his adoption of the collaborative method of production, a custom particularly characteristic of Antwerp’s artistic community in this period, which he had engaged in once before when he painted the Amazons with Jan Brueghel. His next collaboration, made jointly with Frans Snyders, was probably The Recognition of Philopoemen (Madrid, Prado). This was the beginning of another enduring collaborative relationship as he and Snyders would continue to create joint works until Rubens’s death. Apparent in his relationship with Snyders and these early collaborations is Rubens’ understanding of and commitment to creating works in concert. At times when Snyders followed Rubens’s design, their techniques were so similar that it is difficult to differentiate between the work of the two artists; Rubens approached the task of guiding their collaboration minded towards creating a work that represents at once cohesion in thought and the individual excellence of each painter.

The reciprocity of this sentiment between Rubens and Brueghel, coupled with the intimacy of their relationship, seems to indicate why the two artists were able to maintain such an unparalleled and prolific collaborative career. In addition to the roughly two-dozen unique works they created during their twenty-five year collaboration, Rubens and Brueghel worked together on more personal projects. On the altar above the tomb of Brueghel’s father, painter Pieter Bruegel, Rubens painted The Delivery of the Keys to Saint Peter and he also painted a portrait of Brueghel with his family (London, Courtauld Institute). Letters to friends and patrons, such as those written to Cardinal Borromeo, document their affection: Rubens often served as Brueghel’s secretary and transcribed Brueghel’s words in his own hand, while Brueghel recommended his friend’s work to his patron.

Though Rubens occupied a more illustrious position within the court, it was usually Brueghel, nine years Rubens’s senior, who acted as the lead for their joint compositions. Only one collaboration, The Garden of Eden with the Fall of Man (The Hague, Mauritshuis), bears the signatures of both artists, and a few more are marked with Brueghel’s alone. Clear in each work is that the two artists understood the collaborative process as one which provides the opportunity for study and improvement; at times they borrowed motifs from each other. They used the latest innovations, and likely the two artists usually worked on their collaborations without the assistance of their workshops. Their most well known shared works include The Return from War: Mars Disarmed by Venus, The Garden of Eden with the Fall of Man, The Five Senses Series, and several versions of the same theme of The Madonna and Child with Flower Garland.

The two artists continued to collaborate until Brueghel’s death in 1625, the first of two deaths in the mid-1620s that would momentarily disrupt Rubens’s artistic career; the following year he lost his wife, Isabella Brant, to the plague. For eighteen months he turned to diplomacy as a distraction from his grief. During this time he was given the responsibility for traveling between England and Spain to negotiate peace for the Spanish Netherlands and was knighted twice, by the kings of each respective country. This diplomatic interlude gave him the opportunity to resume the study of art in a manner similar to that of his early career. While in Madrid he returned to his study of Titian’s works, made copies of his paintings (a revival of the duplication work from his time in the Gonzaga court), and befriended painter Diego Velasquez. Though he traveled to various European countries to make diplomatic negotiations he was able to complete with his workshop many impressive pieces. In the mid-1620s he returned to Antwerp briefly to paint The Assumption of the Virgin Mary for the Cathedral of Antwerp. Later, in 1629, while in London he painted the Allegory of Peace and War (London, National Gallery) which was given to Charles I as a gift.

As many times before in his life, he grew tired of the diplomatic profession and returned to Antwerp. In 1630 he remarried; he spent much of the ensuing decade with his new bride, the 16-year old Helen Fourment, and his young family. In the early 1630s he conducted two of his final commissions intended for public display: the Saint Ildefonso Altarpiece in memory of Archduke Albert and the triumphal entry into Antwerp for Archduke Ferdinand. After their completions he bought a country home, Chateau de Steen. There he spent his time painting landscapes–subject matter humble in comparison to that of the major public commissions that marked his career–and leading an increasingly private life until his death in May 1640. 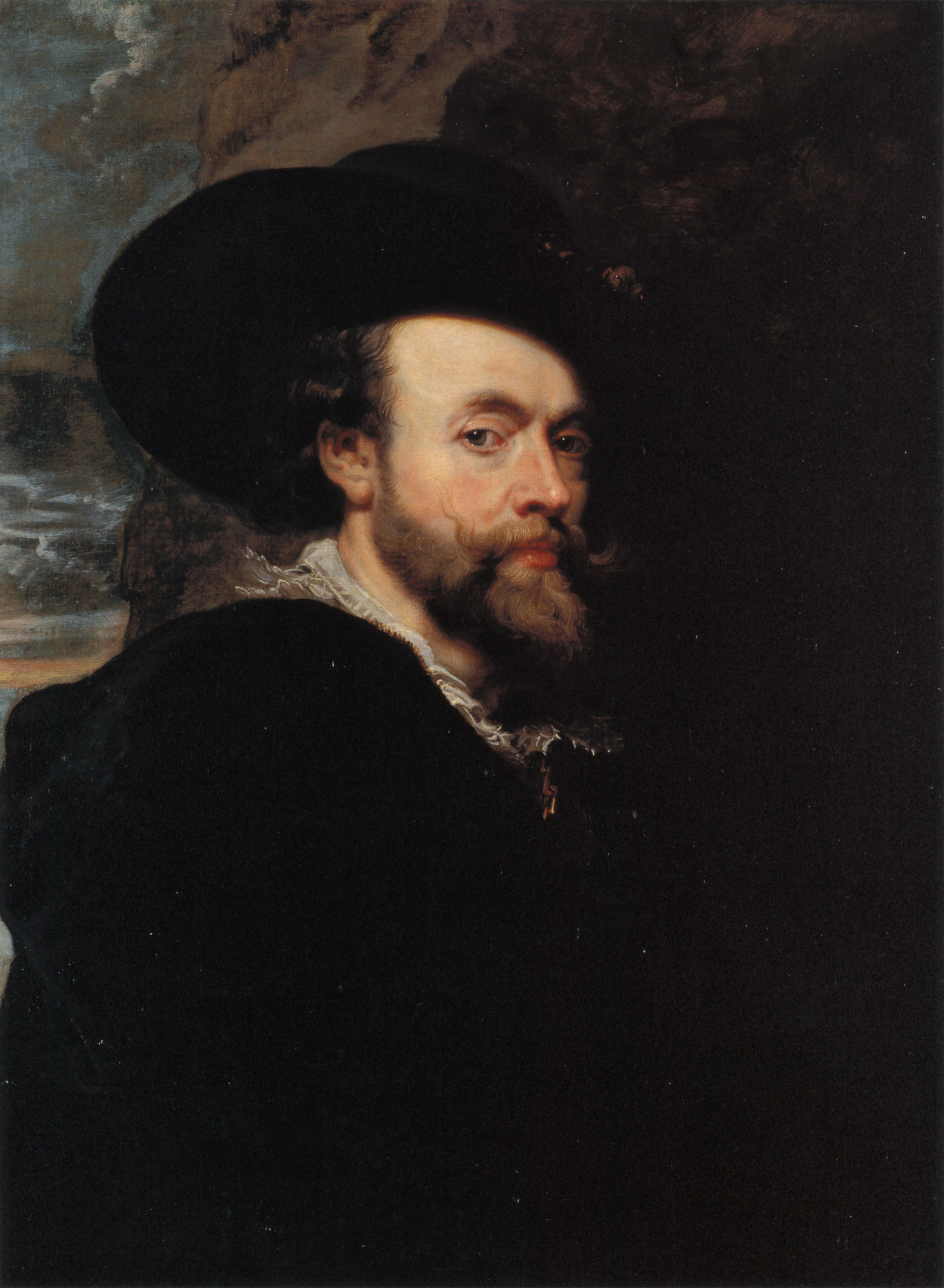