Born in 1556, Otto van Veen was a prominent Flemish painter, poet, and draughtsman based in Antwerp. Also known by the Latin forms of his name, Octavius Vaenius and Otto Venius, he began his artistic career by serving as an apprentice to Isaac Claesz Swanenburgh until 1572. Next, Van Veen transferred to the studio of Dominicus Lampsonius and Jean Ramey, where he remained as an apprentice until 1575, when he embarked on a five-year trip through Italy. His movements are somewhat unclear during this time, but it is known that Van Veen returned to Munich in 1580. By 1585 he was back in Brussels and had been appointed court painter of Alexander Farnese, the Duke of Parma. This position lasted until his move to Antwerp in 1592, where worked to meet the high demand for altarpieces and other church decorations; it was also during this time that he started his own workshop. One of his most notable students was Peter Paul Rubens, who was an apprentice in Van Veen’s studio from around 1595 to 1598. In 1593, he became a master in the Guild of St. Luke. Soon he began to aid Archduke Ernest of Austria in the acquisition of artwork by distinguished local painters, including pieces by Hieronymus Bosch and Pieter Bruegel the Elder. In the late 16th and early 17th century, he collaborated with Jan Bruegel the Elder in works that may include a Battle of the Amazons and Crucified Christ Before Jerusalem. During this period, he was also active in the production of emblem books, works containing allegorical pictures and matching texts, in which his humanist values were illustrated. In addition to this, van Veen created many works for Archdukes Albert and Isabella and served as dean for the Guild of St. Luke in 1602 and for the Romanists in 1606. In 1615, he moved to Brussels where he became a member of the local painter’s guild; on May 6th, 1629, he died at age 73. 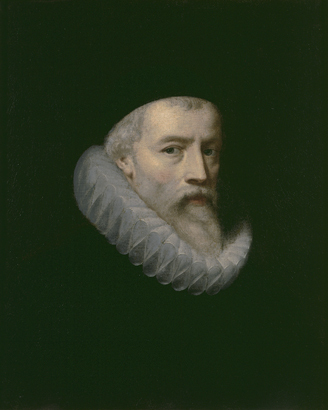