Infanta Isabella Clara Eugenia was the most prominent female patron of Jan Brueghel. The infanta was born on August 12, 1566 into the powerful Habsburg family. She was the eldest daughter of King Philip II and his third wife Elisabeth de Valois, who died just two years after Isabella’s birth. Subsequently, Isabella and her sister Catalina Micaela (one year her junior) were left in the care of Doña Johanna de Jacincourt, the mistress of the robes and in the latter half of Isabella’s life, her close friend. Though little is known about Isabella’s court education, she was reputed to be an adept horseman, skilled with an arquebus, and fluent in Portuguese, all of which skills endeared her to her father.

As the first-born child of King Philip II, Isabella was entitled to rule the Low Countries, but succession laws required that she take on a male consort before claiming her sovereign position. On April 18, 1599, Isabella was married to her cousin Archduke Albert of Austria with whom she ruled over the Habsburg Netherlands for more than twenty years. Had they had a child, he or she would have become sovereign of the Spanish Netherlands, but they did not. Nonetheless, the two decades of their joint rule were a momentous period characterized by their involvement in Spain’s response to the Dutch Revolt and by their formative patronage of baroque masters Jan Brueghel, and his longtime collaborative partner and friend, Peter Paul Rubens.

In fact, one of the most recognizable images of Isabella is the product of collaboration between Brueghel and Rubens; Infanta Isabella Before Mariemont Castle, was a joint project completed ca. 1615-18 during the most productive period of their collaborative career. As in most of their collaborations, Rubens was responsible for the human subject, Isabella herself, while Brueghel painted the landscape. Brueghel included in the background Mariemont Castle, one of the couple’s smaller homes but particularly beloved by the Infanta. Independently, Brueghel painted a number of scenes in which the couple interact with the Flemish peasantry, for example the Peasant Wedding Banquet with the Archdukes. These pieces have intrigued scholars for their portrayal of the sovereign figures on an intimate basis with the common population. They represented, for the rulers, a sense of mutual love between themselves and the people who worked their land.

In 1621, upon the death of her husband for whom she would later commission from Rubens the Saint Ildefonso “Altarpiece,” Isabella joined the Third Order of St. Francis as a nun. Although she wished to retire to the Convent of Poor Clares in Madrid, at the insistence of her nephew Philip IV she was reappointed to the position of Governor of the Netherlands. She held this office until her death on December 1, 1633.

So favored was she in popular memory that King Louis XIII of France wished to beatify her. Then her fame dwindled. Nearly three centuries later, in 1912, Countess Marie Hennequin de Villermont, a painter, writer, and proponent of feminist thought in the Belgian court, published the first biography of Isabella Clara Eugenia, two-volumes in length. 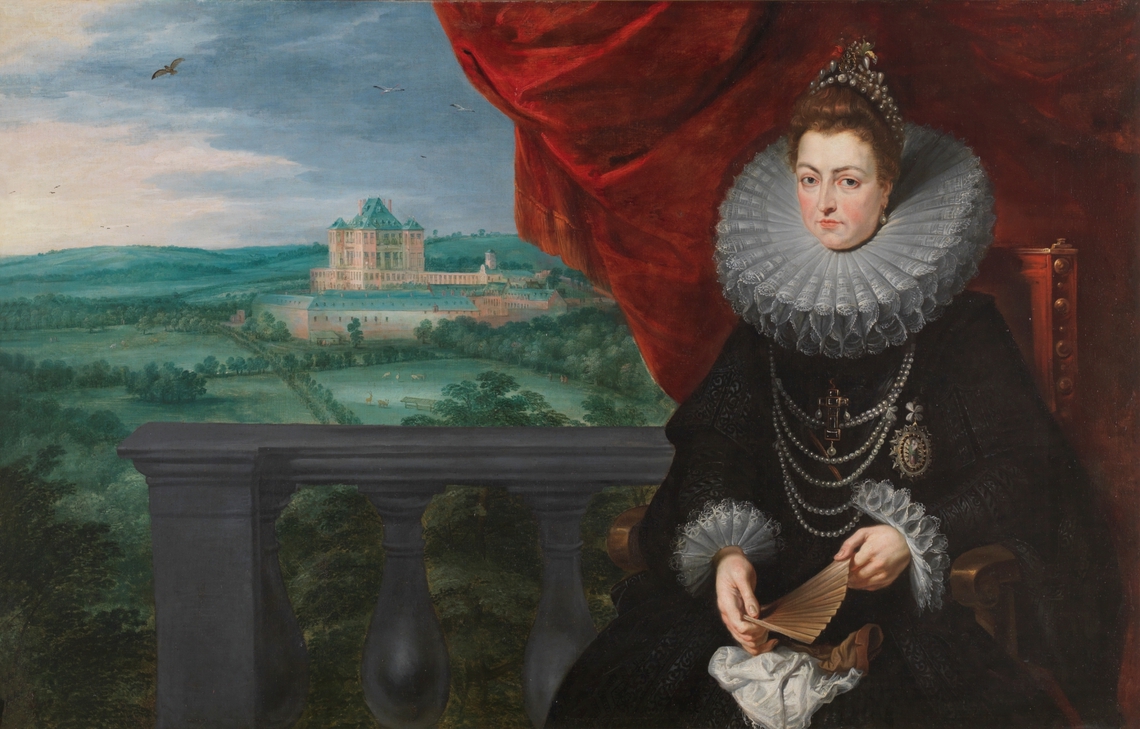