Hendrik van Steenwyck the Elder was born in 1550 in the Dutch town of Kampen, in the province of Overijssel. As a young man in the 1560s, he moved to Flanders in the pursuit of an artistic career. Van Steenwyck intended to settle in Antwerp but as Protestants, he and his family were forced to relocate to Aachen, where he would live until 1576. In 1573, he married Helena Heylwich, who was part of the Valckenborch family of artists. They would go on to have thirteen children. After the Pacification of Ghent, Van Steenwyck returned to Antwerp in 1577 until he was forced to leave again after the city was retaken by the Spanish. To avoid religious persecution, Van Steenwyck and his family moved to Frankfurt, Germany in May of 1586, where they finally settled. Van Steenwyck became a freeman of the city in June 7, 1587. He would work and remain there until his death in 1603 and he is buried in a Lutheran cemetery in Frankfurt.

During his time in Aachen, Steenwyck studied with painter Hans Vredeman de Vries, learning about perspective and the representation of architecture. When he arrived at Frankfurt, he was able to secure the patronage of Ernst-Friedrich, Margrave of Baden-Durlach, for whom he painted mainly ceiling pictures. His first foray into exterior architectural scenes was in 1588. Steenwyck had at least one pupil, Pieter Neeffs the Elder. His oldest son, Hendrick van Steenwyck II, would also have a prolific artistic career in the same specialty as his father.

Van Steenwyck collaborated with many other artists including Hans Vredeman de Vries, Gillis Mostaert, Frans Francken, the Valckenborch family, and Jan Brueghel. It is not certain when Steenwyck and Jan began to collaborate, or if they worked together at all during Steenwyck’s lifetime; but by 1609, Brueghel was painting figures into some of the deceased Van Steenwyck’s pictures, probably at the request of his son, Hendrik II. 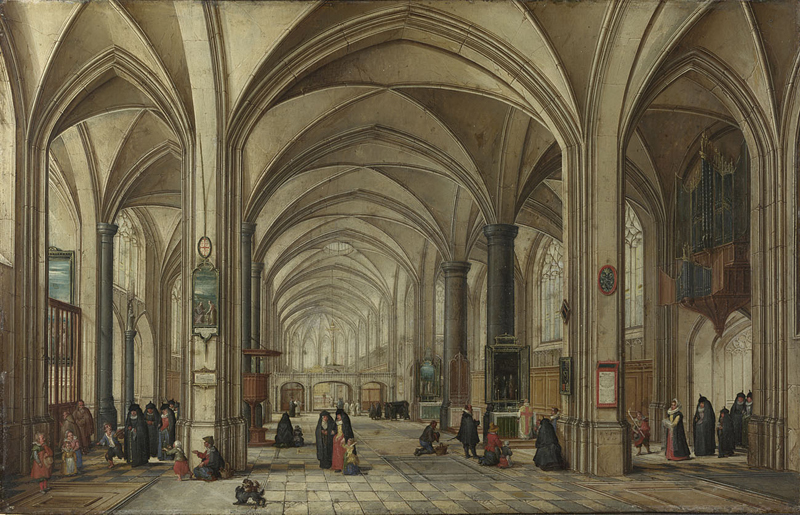