Hendrick van Balen was born in 1575 to the merchant Willem van Balen and Mechtelt van Aelten. A resident of Antwerp for most of his life, he became a master (Freimeister) in the city’s Guild of St. Luke (1592/3) before embarking on a trip to Italy. During his time there, he either met or studied the works of Hans Rottenhammer, and he was also heavily influenced by the work of Tintoretto. In 1609, back in Antwerp, he was named deacon of the painters’ guild. He was also constantly praised as liefhebber, a term describing a painter or lay patron who demonstrated acute and learned appreciation of contemporary art. For example, Van Balen received this accolade together with Peter Paul Rubens and Jan Brueghel the Elder for procuring a work painted by Caravaggio. Van Balen was intimately connected to Rubens and Brueghel in both professional and social capacities: they collaborated on paintings and shared drawings, and public records attest to their mutual appointments as godparents as well as intermarriage in the next generation. Van Balen regularly worked alongside contemporaries outside of this trio, including Anthony van Dyck, one of his many pupils. He married the middle-class Margareta Briers (1604) and fathered eleven children, three of whom—Jaspar, Hendrick the Younger, and Jan, the most successful—became painters. He died on July 17, 1632.

Of a total 219 works attributed to Van Balen by Bettina Werche, 76 are either confidently or tentatively identified as collaborations with Jan Brueghel the Elder. Their earliest work together—“The Judgment of Paris” (Berlin) —was painted in 1600. Van Balen’s oeuvre, as described by Werche, spans three periods and several genres. The first period starts with his ascension as Freimeister and covers his early works through 1608. Van Balen absorbed the late Mannerist tendencies of Italian art in the 1590s, yet the works produced after his return to Antwerp demonstrate a reinvigorated Flemish influence on his figuration. The second period of 1609–25 involves the radical adoption of Rubens’ style as well as its subversion, particularly through his characteristically small format. Finally, the third period of 1625–32 is bounded by the deaths of Brueghel and Van Balen. At this time Van Balen concentrated more on central, plot-driven scenes by painting fewer and larger figures. The productive cooperation between the Brueghel and Van Balen families continued in this period with Jan Breughel the Younger’s contributions to about 50 works, although Hendrick’s son Jan van Balen would sever the connection upon his father’s death.

Van Balen painted altars, designed stained glass windows, and engaged with the copper plate as a medium, but he is best known for his myriad cabinet paintings (Kabinettbilder). Through most of his career, he painted heavily populated scenes related to mythology, allegory, and biblical history with a preference for nude female mythical figures and personifications. In the realm of religious iconography, Van Balen contributed to the development of the floral wreath (Blumenkränzen) type of Madonna and Child depiction. 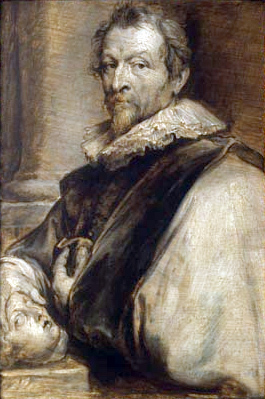