Daniel Seghers was a Flemish painter who worked mostly in Antwerp. After the death of his father, the silk merchant Pierre Seghers, Daniel and his mother moved to the northern Netherlands and took on the Calvinist faith. While he may have begun his training in the North, Seghers returned to Antwerp and Catholicism as a young man.

Seghers became a master in the Antwerp Guild of St. Luke in 1611, having trained under Jan Brueghel the Elder. He entered the Jesuit order in 1614. In 1625, Seghers became a Jesuit priest and began signing his works as Daniel Seghers Societatis Jesu. After his ordination, Seghers spent two years in Rome, but he moved back to Antwerp in 1627 and worked as a flower painter at a monastery until his death.

From his teacher Jan Brueghel, Seghers took up the practice of garland painting, always a distinctly Flemish form. It became his specialty. His garlands encircled images by Antwerp colleagues like Thomas Willeboirts Bosschaert, Cornelis Schut, and Gonzales Coques.

Seghers’s flower pictures are considered part of the Jesuit Order’s Counter-Reformation campaign. He and his collaborators emphasized the devotional characters of the main images, and the theologians of his Order believed Segher’s garlands aided worship of the figures they surrounded. 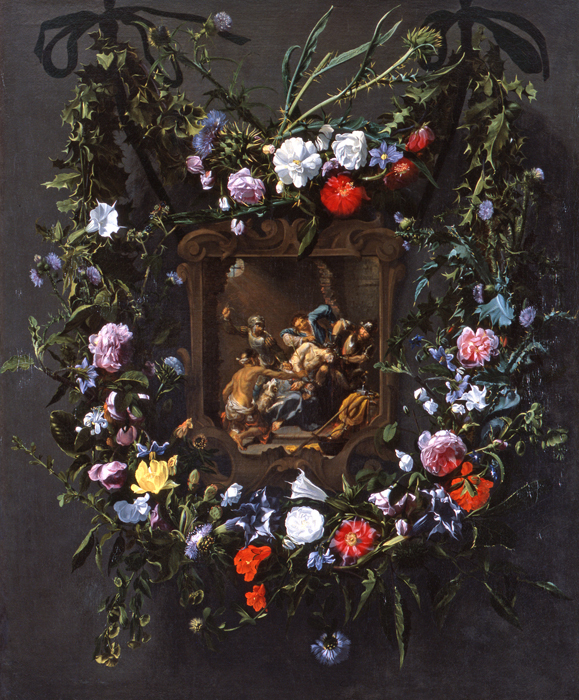